How live experience & digitalisation work together

The National Theatre in Britain was the first theatre to broadcast digital versions of their shows, as far back as 2009, the programme they initiated was called “NT Live”, closely followed by Metropolitan Opera of New York. This new form of show viewing was given the salubrious title of “Event Cinema”. A new type of entertainment trailer blazed by David Bowie in 2003. In the UK alone, this fresh format gained profits in excess of 60,000 GBP in 2019 and 1 billion GBP globally in the same year. This new form of digital entertainment has been an unparalleled development in the global market of this industry. Never before have so many shows been able to reach so many people worldwide in real time.

The Haydn Cinema of Vienna is a prime example of a venue offering public viewings of famous plays, a place abroad to watch an NT show or RSC shows from the UK, on cinema screens, in real time. Yes, you didn’t have to travel to London anymore to catch a performance. In most recent times this live-streaming or being able to view shows online has gathered huge momentum with the onslaught of the global pandemic which ultimately shutdown the entertainment business and forced people to stay home. Enter TV, computer and internet; which became audiences only avenue to top shows by well-respected establishments.

Turn on your computer and a simple placement of “Best online theatre shows watch now” 1) in your online search will bring you to a wealth of websites, the famous and less famous, bringing you top entertainment at home. Online magazines such as “Time Out” offer links to the UK, US and Australian theatre scene and offer great ideas of how to stay entertained at home. Here are just some sites suggesting great ways to watch theatre from the comfort and safety of your own sofa:

1) btw: plug “Österreich Theater Online” to your search engine for the good, local stuff. Platforms such as eventbrite.at offer a wealth of shows to stream from the private sector.

Outside of the pandemic of 2020-2021 surveys have shown that this new online and cinema digitalisation of theatre performances has, surprisingly, not had an impact on the number of audiences at live performances. In fact, rather than having a negative effect, those who are able to capture a performance digitally are more likely to then want to go and see that show or others live.  In a survey conducted by the British Arts Council 37% of those watching online or in cinema events, also attended live shows annually regularly, more than the people who did not also make the same experience.

What has been further notable, in the live theatre to online or cinema theatre experience, is that those willing to experience this form of entertainment are much younger than your average theatre goer. In a survey in the UK spanning 2009 to 2013 of the 16–24-year-olds 55% had watched theatre/shows online vs. 24% over 44-year-olds. Touring activities further remained widely constant. In the same survey, 90% who made a cinema event experience and 70% who took advantage of online streaming stated they were satisfied with their online experience, and it had met their expectations. They would absolutely recommend the encounter but…they further noted it did not in any way replace the live experience for fulfillment.

The Pandemic impact on cultural life

In February 2020 a global pandemic caused havoc in the world of entertainment, not only for audiences but for the entertainment providers in particular.  As a director and producer of a theatre in Vienna, the hit was keenly felt. As we performed the hit show “The Mountaintop” in February 2020, a strange illness coming from China was being whispered through the corridors of Theater Drachengasse and other theatres, something dangerous. Ischgl-Gate happened at the height of the Austrian Ski season. The plague had hit. We were very lucky to enjoy the thrill of completing a very successful show, with great reviews. Amongst our many lovely guests, we greeted the members of the Austro-British society for an evening, followed by a lovely talk back session with the actors accompanied by food and sparkling wine. We were all lucky. The show closed with standing ovations.

A week later, it’s director – me – joined an Acting Masterclass by an international acting instructor. As the masterclass progressed the news became increasingly alarming, I was asked to stop visiting the course, as I might catch a deadly disease and die.

Participants came in each morning trying to leave the world news at the door so we could work. Then disaster struck and 10 actors in a room started to fear for their jobs as murmurs of shut downs across the theatre world occurred. The day the instructor Robert Castle left, he got the last seat, on the last aeroplane to Paris before the borders closed and flights were stopped. Other actors, in shows abroad were told these would be closed down for a month, and found themselves fighting to get home to family from as far as away as America, facing 30 hours of nail-biting travel, as they struggled to get back to Austria. Often they had to change flights over 5 times, sit in airports for hours, to reach their destination before airports closed and borders too, indefinitely.

Sadly, the theatres did not stay closed for only a month but, initially in Austria two months, the financial loss to a vast industry (150 million Euro annually in Austria alone) has been huge. Broadway & the West End remained mostly closed for over a year, Austria re-opened for a short period between May and September 2020. Again, Vienna Theatre Project was one of the few companies to be able to open the 2020/2021 season. Barely had the first show at Theater Drachengasse had its successful season opening, before theatres shut once more in early October. This time for seven whole months. Only in May 2021 was permission granted by government to welcome audiences again, due to seating restrictions in all houses, it is cheaper for the smaller theatres to remain closed and stay online than re-open their doors to live customers.

What impact have online shows?

Whilst previous surveys, like the ones above through the British Arts Council, indicated cinema events and online theatre services did not have an impact on live show audience numbers; to have to rely completely on these options of digital entertainment is not financially viable – at least not for the theatre industry. After the February to May 2020 period, landmark houses such as the State Opera House, Volkstheater and many other institutions, including Theater Drachengasse, had geared themselves up with the technology and know-how to provide streaming or live-streaming of their shows, so they would not be forced to stay closed indefinitely. Since October 2020 many houses in Austria and abroad started to offer the shows they could online. But not all Dramatist Agents want their shows to be online only and will grant streaming rights; some argue the tickets are generally much cheaper so they make less money, whilst others feel they are better off with some money than no money.

The Austrian government has tried hard to find solutions for struggling actors, many who have been out work for almost a year, as while the govt. funded houses continued to function for online events, the smaller could not. Furthermore, even at the funded institutions, the amount of shows produced and available for viewing, if possible at all, has been considerably reduced. This caused a huge loss of employment across a wide spectrum of the industry. Not only the actors, but technical staff, costume, catering, cleaning, coat check, office management and more have lost jobs. Food and drinks have been banned, strict social distancing imposed, crippling revenue. Until the authorities offered free testing, theatres were forced to test all employees regularly and at their own cost. Then there are the indirect businesses affected: bars, taxis, restaurants, dry cleaning, storage and many more – all these businesses enjoy financial gain from the live theatre/entertainment experience.

In March 2021 the Austrian regime made a commitment to plug 430 million Euro into reviving Austrian industry, that includes the entertainment business – the amount dedicated to this industry has been much questioned. The studies as above and the most recent experience due to the global pandemic absolutely indicate:

As Ricardo Muti so beautifully commented to the Associated Press in May 2021 at the re-opening of the Italian Musical season in Ravenna which reflects keenly the loss of live experiences and investment therein due to this pandemic, “The emotion is above all one of rebirth, which is a positive word, but it means that something died before. So, within the positivity, there is the regret over something lost. And we, for a year, lost the possibility of life, in the complete sense of the word”.

But it was his unforgettable statement about live culture at the New Year’s 2021 Concert of the Vienna Philharmonic, which most succinctly described the impact of culture on society “So music is important not because it is an entertainment – many times we see everywhere music considered as entertainment. Music is not only a profession but it is a mission. That is why we do this work. A mission to make society better. To think about the new generation that in one complete year has been deprived from deep thinking, thinking all the time about health, health is the first most important thing, but also the health of the mind. And music helps. So, my message to the governments and presidents and prime ministers everywhere in every part of the world: consider culture always as one of the primary elements to have a better society in the future.”

His words focused on music, but exactly the same can be said of theatre and its important impact on society. It is a reflection of the study in this essay, that both statements were made at theatre, one was with a live audience and one without and both were able to be viewed online too.

What do you think? Have you watched theatre or any show online?  Did you enjoy it? Would you give up live theatre to experience it in the comfort of your own home? What is the difference for you? What kind of impact do you think theatre has on society live or online? Have something you’d like to share?

Let us know your comments. 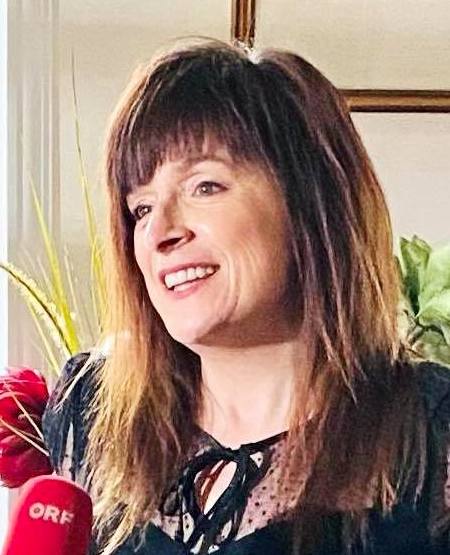 Joanna Godwin-Seidl is a Board Member of the Austro-British Society. She has lived in Austria for over 20 Years, she used to work in international sales, and in 2004 made the mad decision to make herself cash poor but soul rich and gave up a well-paid job travelling the world, selling computer parts to mulit-nationals to devote her life to theatre and film. She is now a professional director, actress and voiceover artist and runs her own, critically acclaimed theatre company www.viennatheatreproject.com.

The opinions expressed in this article are entirely hers and reflect in no way the opinions of the ABS.